Prisons and Drugs: A global review of incarceration, drug use and drug services

Prisons and Drugs: A global review of incarceration, drug use and drug services
reply

Prisons play an important role in drug policy. They are used to punish people who break drug laws and they also hold a large number of people who have experience of drug use and drug problems. They therefore have an important part to play in attempts to reduce the harm caused by drugs. Imprisonment itself can be seen as one type of harm, as it causes problems for prisoners and their families and creates a large fi nancial burden for taxpayers. These harms and costs are diffi cult to calculate, but there is little evidence that large scale imprisonment of drug offenders has had the desired results in deterring drug use or reducing drug problems (Bewley- Taylor, Trace, & Stevens, 2005).

In this paper, we examine the international prevalence of drug users, drug use and related problems in prisons and we report on the problems that are related to the issue of drugs in prison. We go on to examine the international guidelines and effective responses that have been developed in this area in the last decade. The paper is a review of the literature, based on a search of bibliographic databases including Medline, PubMed, ISI as well as EMBASE and contacts with researchers and practitioners in the fi eld up to January 2007.

We hope that this paper provides an accessible guide to policymakers and service designers who are considering the appropriate responses, or evaluating and refi ning existing responses, to drug use in prisons in their own country.

Published in 2007 by The Beckley Foundation 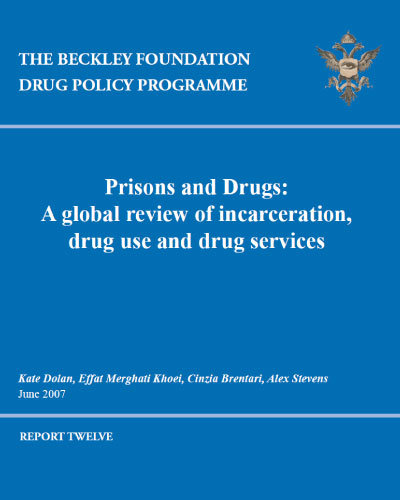