Framing the Epidemic: NGOs and the Fight Against HIV/AIDS in Russia

Framing the Epidemic: NGOs and the Fight Against HIV/AIDS in Russia
reply

With more than one million people living with HIV, Russia is facing the biggest HIV epidemic in Europe and is one of the few countries in the world where infection rates are increasing. The response to the epidemic is shaped by the way Russian state actors and non-governmental organizations (ngos) view the issue of HIV and how they define policy priorities.

In order to understand the factors that underlie HIV policies in Russia, this contribution analyses the framing of HIV. It thereby makes use of framing theory. Based on document analysis and interviews with NGO experts, the article differentiates between four main framings in Russia: the framing of HIV as a medical issue, as a security threat, as a moral problem or as a human rights concern.

In Russia, the moral framing of HIV has become dominant over the past decade. The epidemic is increasingly viewed as the result of harmful influences from the West which need to be overcome. As a result, Russia has departed from evidencebased approaches to HIV. Instead, it solely focuses on strengthening so-called “traditional values”, e.g. by engaging in healthy lifestyle promotion. The moral framing of HIV has also impacted the mobilization potential of Russian NGOs, as it favour those organizations that relate to the dominant framing of HIV and support government priorities. 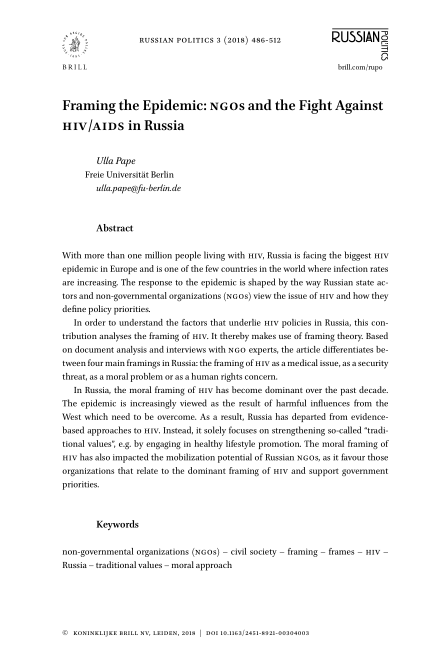