Background: The establishment of trust between researchers and participants is critical to advance HIV and HCV prevention particularly among people who inject drugs (PWID) and other marginalized populations, yet empirical research on how to establish and maintain trust in the course of community health research is lacking. This paper documents ideas about trust between research participants and researchers amongst a sub-sample of PWID who were enrolled in a large, multi-year community health study of social networks and HIV/HCV risk that was recently conducted in rural Puerto Rico.

Methods: Qualitative research was nested within a multi-year Social Network and HIV/HCV Risk study involving N = 360 PWID > 18 years of age living in four small, rural Puerto Rican communities. Semi-structured interviews were conducted between March 2017 and April 2017 with a subset of 40 active PWID who had been enrolled in the parent study. Interview questions invited participants to draw upon their recent experience as research participants to better understand how PWID perceive and understand participant-researcher trust within the context of HIV/HCV-related epidemiological research.

Results: Fear of police, stigma and concerns regarding confidentiality and anonymity were identified as structural factors that could compromise participation in HIV/HCV-related research for PWID. While monetary compensation was an important motivation, participants also valued the opportunity to learn about their HIV/HCV status. During their participation in the study, gaining knowledge of safe injection practices was perceived as a valuable benefit. Participant narratives suggested that PWID may adopt an incremental and ongoing approach in their assessment of the trustworthiness of researchers, continuously assessing the extent to which they trust the research staff throughout the course of the research. Trust was initially generated through peer Respondent Driven Sampling recruitment. Research staff who maintained a presence in the community for the entire duration of the prospective study reinforced trust between participants and the research team.

Conclusion: Although PWID face numerous structural barriers to research-related trust in HIV/HCV research, we found that using a peer-based recruitment method like RDS, and employing a research staff who are knowledgeable about the targeted population, culturally sensitive to their needs, and who maintain a long-term presence in the community may help mitigate many of these barriers. The reputation of the research is built incrementally as participants join the study. This contributes to a “street reputation” that grows as current or former participants vouch for the study. Establishing trust was identified as only the first step towards building a collaborative relationship with participants, and our findings suggest that steps to address criminalization and stigmatization also are necessary to support research trust. 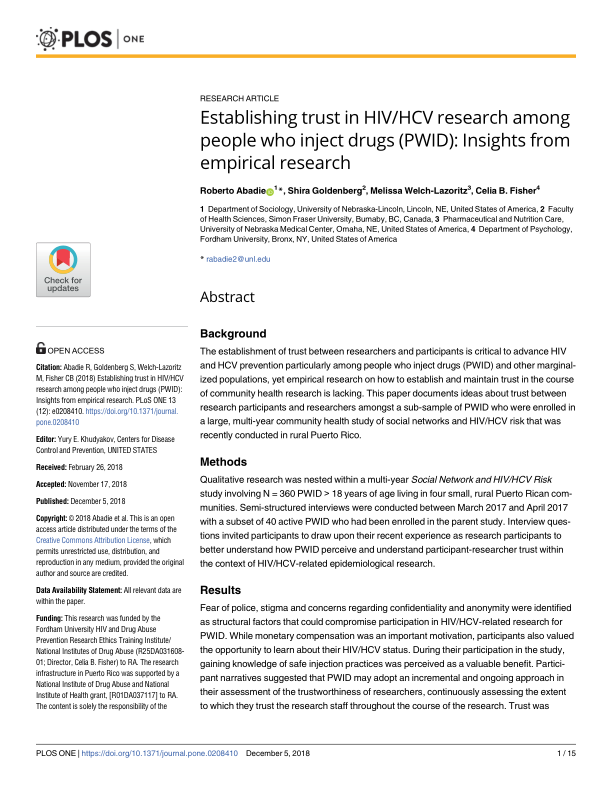