Evidence of the benefits of MAT

Community MAT programmes have rapidly expanded since the mid-1990s. Today, more than three quarter of a million opioid users receive MAT worldwide. MAT has expanded substantially in the European Union in the past 30 years. Today, all European Union countries have MAT programmes in some shape or form, although countries vary considerably in the extent and nature of the treatment accessibility and quality. Substitution treatment in its different forms has established itself as a widely accepted harm reduction and treatment measure for opiate-dependent individuals in the community (Council of Europe, 2001).


In a common position paper, WHO, the United Nations Office on Drugs and Crime (UNODC) and UNAIDS (2004) stated the following.

The prescription of MAT and administration of opioid agonists to people with opioid dependence – in the framework of recognized medical practice approved by competent authorities – is in accordance with the 1961 Single Convention on Narcotic Drugs and the 1971 Convention on Psychotropic Substances.

Ample data support the effectiveness of MAT programmes in reducing high-risk injecting behaviour and in reducing the risk of contracting HIV. MAT is the most effective treatment available for opioid dependent injecting drug users in terms of reducing mortality (the death rate of people with opioid dependence in methadone maintenance treatment being one third to one quarter the rate for those not in treatment), heroin consumption and crime. Drug users have considerable criminal involvement before entering treatment, with these levels reduced by about half after one year of methadone maintenance treatment. Benefits are greatest during and immediately after treatment, but significant improvement remains for several years after treatment. Reductions are most marked in drug-related criminal behaviour. Many of the concerns raised about MAT have been shown to be unfounded. In particular, MAT has not been shown to be an obstacle to ceasing drug use, and in fact, MAT has been found to be more effective than detoxification programmes in promoting retention in drug treatment programmes and abstinence from illegal drug use. MAT is a cost-effective method of treatment, comparing favorably in terms of cost-effectiveness with other health care interventions, such as therapy for severe hypertension or for HIV infection and AIDS. According to several conservative estimates, every Euro invested in programmes may yield a return of between four and seven Euros in reduced drug-related crime, criminal justice costs and theft alone. When savings related to health care are included, total savings can exceed costs by a ratio of 12:1. Injecting drug users who do not enter treatment are up to six times more likely to become infected with HIV than injectors who enter and remain in treatment (National Institute on Drug Abuse, 2000).


In prisons, as in the community, MAT, if made available to prisoners, has the potential of reducing injecting and syringe-sharing. The WHO (1993) Guidelines on HIV infection and AIDS in prisons therefore recommend: “Prisoners on methadone maintenance prior to imprisonment should be able to continue this treatment while in prison. In countries where methadone maintenance is available to opiate-dependent individuals in the community, this treatment should also be available in prisons.” Similarly, the Dublin Declaration on HIV/AIDS in Prisons in Europe and Central Asia (Lines et al., 2004) states:

Article 1: Prisoners have a right to protect themselves against HIV infection.
Prisoners living with HIV/AIDS have a right to protect themselves from re-infection and/or co-infection with hepatitis C and/or TB. Therefore, States have a responsibility to provide free access to methadone and other substitution treatments to prisoners in those countries where these treatments are provided in the community. This must include both the ability of people who are already on such a treatment to continue it when incarcerated and the ability to initiate substitution treatment during incarceration. Countries that have not legalised or implemented substitution treatments should do so.

The full text of the Dublin Declaration on HIV/AIDS in Prisons in Europe and Central Asia is here https://www.penalreform.org/resource/dublin-declaration-hivaids-prisons-europe-central-asia 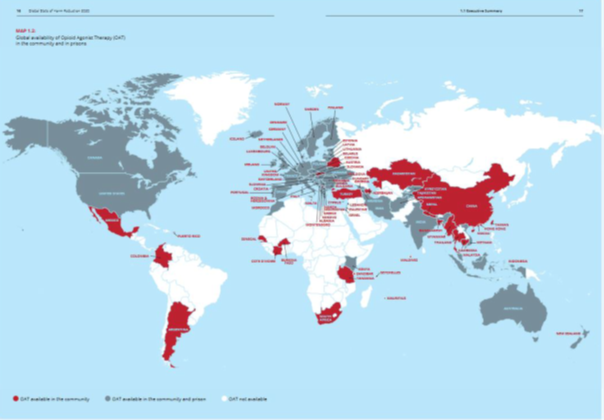 In Spain, 18% of all prisoners, or 82% of problem drug users in prison, receive this treatment.

MAT programmes exist in prisons in 43 of the 47 Council of Europe Member States , although in some they remain small and benefit only a small number of prisoners in need. Initially, substitution treatment in prisons was often made available only to inmates living with HIV or with other infectious diseases or pregnant women. Provision often remains insufficient and below the standards of MAT in the community. In many countries, MAT is still likely to be discontinued when people on treatment enter prison. A treatment gap persists between those requiring MAT and those receiving it.

Some prison systems are still reluctant to make MAT available or to extend availability to the prisoners who were not receiving it before incarceration. Some consider methadone or buprenorphine as just another mood-altering drug, the provision of which delays the necessary personal growth required to move beyond a drug-centred existence. Some also object to MAT on moral grounds, arguing that it merely replaces one drug of dependence with another. Other reasons for resistance to MAT include:

Patient and persistent outlining of the strong evidence of the advantages that MAT can bring both to prisoners and to the institution as a whole is the best way to overcoming these barriers. Specialist clinicians may need to keep hold of the fact that knowledge of the enduring and recurrent nature of drug dependence is not widespread among medical or managerial colleagues in prison. Moreover, MAT often appears to the lay person to be more likely to exacerbate rather than ameliorate the health and social problems associated with drug dependence. The specialist should therefore listen to and understand the misgivings of colleagues, whilst continuing to educate and advocate on behalf of drug users who merit this straightforward and economic form of treatment that has been proven to potentially improve and extend life.

Some prisoners are also reluctant to benefit from MAT in prisons, either because they lack information about its or because they want to hide their opioid/drug use (one reason being that they fear prejudice and disadvantageous treatment if seen as a drug user), which is impossible if they receive MAT. Criminal subcultures in prison controlling and benefiting from illegal opioid trafficking may build up resistance against MAT and pressures against patients undergoing MAT (Azbel et al. 2017).

If there were reliably effective alternative methods of achieving enduring abstinence, MAT could indeed be seen as inadequate. However, there are no such alternatives (Dolan & Wodak, 1996).

Evaluations of prison MAT programmes have provided clear evidence of their benefits. Studies have shown that, if dosage is adequate (at least 60 mg of methadone) and treatment is provided for the duration of imprisonment, such programmes reduce drug-injecting and needle sharing and the resulting spread of HIV and other blood borne infections. In addition, they have additional and worthwhile benefits, both for the health of prisoners participating in the programmes and for prison systems and the community.

In Canada, the federal prison system expanded access to MAT after evaluation demonstrated that MAT positively affects release outcome (reduced re-incarceration). Participants in such a treatment programme were less likely to commit crimes and return to prison. This is important because the cost of the institutional MAT programme may be offset by the cost savings of offenders successfully remaining in the community for a longer period than equivalent offenders not receiving such treatment.

In addition, MAT can help to reduce the risk of overdose for those nearing release (Dolan et al. 2005 follow-up randomized controlled trial (RCT) = no deaths post-release in methadone maintenance treatment group, 17 deaths in control group]. Many prisoners resume injecting once released from prisons but do so with an increased risk for fatal overdose as a result of reduced tolerance to opiates. Extensive research has noted a large number of deaths during the first weeks after discharge from prison that are attributed to drug overdose. Following a UK study of 51,590 releases from prison (Farrell & Marsden 2005), it has been estimated that approximately 35% of all male drug-related deaths and 12% of all female drug related deaths are from prisoners recently released from prison custody. This points to the utility and necessity of prison through care of drug treatment to counteract such risk situations and highlights the importance of MAT not only as a strategy for preventing HIV transmission in prisons but also as a strategy to reduce overdose deaths upon release (Marsden et al. 2017).

Taken together, this evidence – and the importance of providing care and treatment in prisons equivalent to that available outside – provides compelling reasons for prison systems to introduce MAT. Box 1 provides an example of instructions for the treatment of drug users in Slovenia (Kastelic et al., 2001).